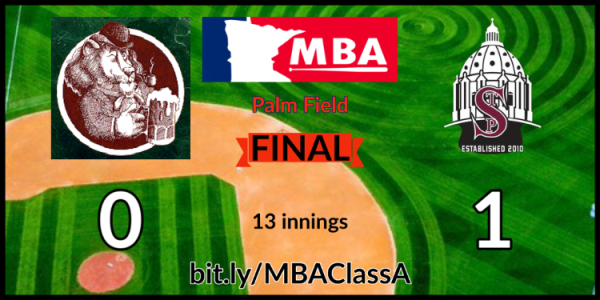 Day 2 at Palm Field ended with a pitching duel for the ages. Lyon's Pub Warriors starter J.D. Scholten and Josh Kubitschek of the St. Paul Capitals went toe-to-toe for nine innings - and it wasn't enough. Neither team could put together any sustained offense for inning after inning.

The game came to a dramatic conclusion in the bottom of the 13th inning when Dan Peterson hit what looked like a harmless pop fly behind the shortstop. The ball was dropped and the first and only run of the game crossed the plate for the Capitals.

Charlie Bartholomew singles with one out. Welter moves to second.

The final inning began with a walk and failed sacrifice, but then Charlie Bartholomew singled to advance Dylan Welter to second. Derek Jacobson struck out swinging for the second out bringing Peterson to the plate. With a 2-2 count Peterson hit the popup that ended the game.

Scholten was brilliant for nine innings, taking a no-hitter into the eighth before Tom Peterson singled. St. Paul would load the bases, but Scholten and the Warriors defense got out of the jam. He was replaced in the tenth by Ben Etzell who was just a good, striking out six in three innings while allowing one hit.

No one on the field though could match the effort of Kubitschek who pitched 13 innings of shutout baseball, striking out 15 batters.

St. Paul Capitals will have a week to rest ahead of their quarterfinal matchup with Stockmen's Irish.